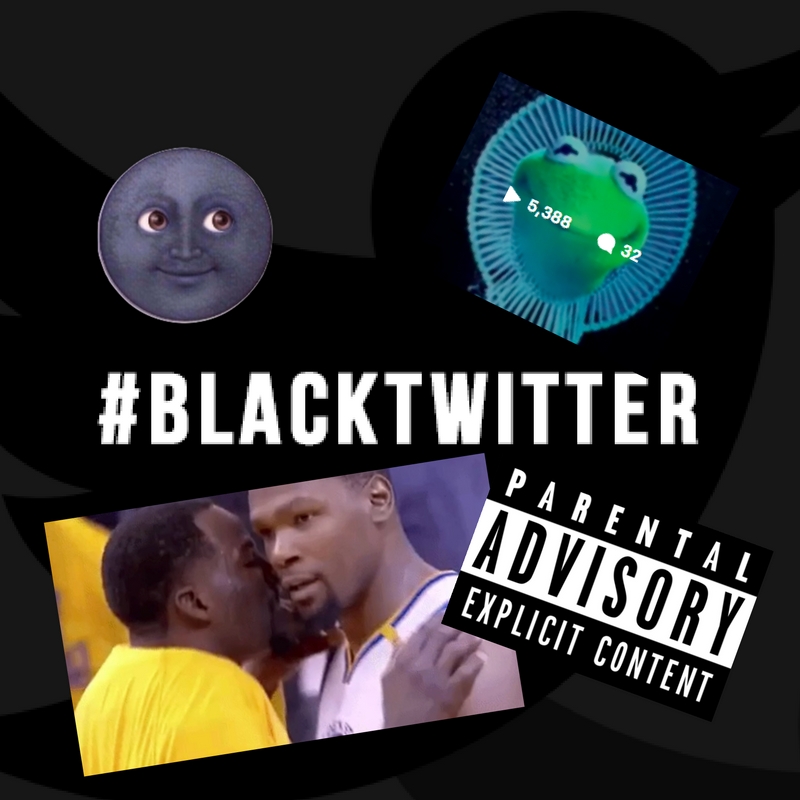 Y'ALL – My 6 page midterm essay on #BlackTwitter as a Subculture got an A!
WE EATIN! pic.twitter.com/kBrqNrJZca

A Black scholarly thread substantiating Black Twitter as an anti-hegemonic subculture; exploring how meme production functions as bricolage and noting the ways in which it has been coopted by mainstream media outlets.

Black Twitter as a Subculture: A Thread
By Joy Ofodu

A few years ago, I discovered the true fount of collective black humor, news and activism and felt as if I had stumbled upon a gold mine. Within Twitter lies a smaller, pettier subdivision of the social network, which boasts 313 million active users overall (Twitter). A 2013 Pew Research poll revealed that 40% of young black Americans are on the platform – a population that has since developed its own unique traditions, voice and identity as a community. In “Black Twitter” is a unique intersection of the general populous, both urban and suburban, educated and studying, and noted celebrities across industries. In this thread, I will substantiate Black Twitter as an anti-hegemonic subculture; explore how meme production functions as bricolage and note the ways in which it has been coopted by mainstream media outlets.

With such a massive, consistently changing demographic, it is easy to make the case for “Black Twitter” being an imagined community, as well as a subculture. In Imagined Communities, theorist Benedict Anderson asserts that a large community (i.e. Black Twitter) is purely imagined “because the members of even the smallest nation will never know most of their fellow-members, meet them, or even hear of them, yet in the minds of each lives the image of their communion.” (Anderson) This improbability of meeting holds true for the millions of users within the subculture. Similarly, Hebdige calls attention to the “systems of connection between things which perfectly equip their users to ‘think’ their own world.” (Hebdige) Black Twitter is a thought-up world. Hundreds of tweets can be found to contain the exact phrase “I love black Twitter” (Twitter) in relation to black-produced memes, jokes and videos – evidence that Black users of Twitter have spoken the community into existence, drawing the boundary around themselves, self-defining as anyone who is Black who uses Twitter to react to the world around them.

This is how you know Black Twitter is its own entity because I have not seen one word about this on my TL. https://t.co/58I1q0iuZW

Black Twitter humor is heavily sustained by the production and exchange of memes and GIFs. These memes are reproduced, screenshotted, cropped and pasted images, ranging from user-generated selfies to iconic film stills. They include the excited Da’Vonne Rogers entering a room* and the aggressive Arthur Fist. While these images are seemingly innocuous or frivolous, they are consistently employed to question, challenge and ridicule the mainstream culture industries they reflect (film, television, music, politics, sports, etc.) For example, User @1942bs employed Da’Vonne Rogers to demonstrate the eagerness of white actors to play people of color, critiquing the lack of representation in the film industry (Blavity). Evidently, these memes are copied from one context and pasted into another, completely altering the connotation behind the image and creating infinite new meaning for Black Twitter users.

Hollywood: "We need someone to play a PoC"
White actor: https://t.co/ai9Dex2xsO

Therein lies a powerful yet subtle form of re-appropriation: the GIFs or moving pictures frequently recycled among Black Twitter tweets and Replies are drawn from widely favored and consumed elements of popular culture such as America’s Next Top Model, Bad Girls Club, sports stars like Michael Jordan and Nick “Swaggy P” Young, and politicians like Obama. While there is evident reason to take collective pride in a black president, there is not as much reason to take pride in the image of an aggressive, overweight black woman in a hairnet banging on pots to disrupt her abhorred roommates* (Know Your Meme) This meme is reminiscent of the Urban Coon stereotype which has plagued African Americans since the 1830’s: “Urban Coons had similar characteristics but also engaged in gambling, dice, and the frequent use of razor blades for solving petty squabbles with other coons… engaging in general buffoonery.” (Authentic History) Fortunately, such stereotypical expressions of black people in media (i.e. wide eyes, lip smacking, eye-rolling, snapping in Z-formation, aggression, strutting) have been re-appropriated by the subculture, celebrated instead as uniquely black and humorously familiar as opposed to shameful or embarrassing stereotypes imposed by outside entities.

The aforementioned memes function not only as celebrated reactions but also as weapons for cultural critique. Cultural theorist Dick Hebdige would identify the deployment of these ‘weapons’ as bricolage: In Subculture: The Meaning of Style, he defines bricolage as the process by which “basic elements can be used in a variety of improvised combinations to generate new meanings within them.” (Hebdige) This relates strongly to Barthes’ ideas of the rhetoric of image: In each meme Black Twitter produces is an ascription of new meaning to the image (i.e. Kermit holding tea in response to a Trump Tweet connotes a complete rejection of the ideas/attitudes therein). The success of the joke and resulting value of the meme to the culture depends on a widely, quickly accepted anchorage – Barthes would insist here upon pinning down a singular meaning of the original image. It also depends on solid execution or relay, in which the original photo or text works with the meme or caption to produce the intended humor that Black Twitter prizes. In this way, rhetorical reconstruction can be taken to be the essential ingredient of this subculture’s defiance of existing norms and meanings.

When Bay Area Drake finds out photos of Toronto Drake with a pic of ATL Drake taking a photo of Jamaican,London,& H-Town Drake is on twitter pic.twitter.com/jEfvVvdxfC

Black Twitter has been known for its noteworthy episodes of bricolage production surrounding major domestic events (i.e. Halftime performances, awards shows) and makes no attempt to shy away from the political sphere. During the 2017 Presidential Inauguration, the community manifested its disappointment in the election outcome into a curation of alternative events, garnering over 300,000 impressions for an #inagurationblackout (Fusion). They promoted viewing of The Wiz and a Malcolm X documentary, artifacts that would hopefully generate an interest in black-led art and encourage further passive resistance against oppressive political structures.

Tomorrow at 11AM est, please join us in ignoring the Inauguration and, instead, live-tweeting The Wiz! More to come! #InaugurationBlackout pic.twitter.com/sJGJIFeWjr

Actively, Black Twitter was alight with disparaging memes and commentary about then President-elect Donald Trump and Melania Trump. (Harper’s Bazaar) User @chauncey_murphy froze a still* from the Inauguration broadcast to dramatize the tension between the former and new First Lady. The still expertly aligns the viewer/reader with Michelle Obama and her lived experience as a black woman (through dead-pan eye contact) while vindicating Melania, who appears stiff and distant from both the user and 170,000 users with whom the tweet resonated. Perhaps in all elections except our most recent one, it is a hegemonic expectation that respect and reverence be shown to the inauguration events, President-elect and new First Lady, as they are symbolic of the U.S. government as a whole. By attacking the new First Lady’s image or imagining conversations between Michelle Obama and Hillary Clinton along the lines of “Girl, I know, Girl,” Black Twitter users are able to bridge the normative high power distance, project their own subcultural style of petty humor onto authority figures and openly reject the observance of American traditions or the Trump administration as a whole.

As with many popular elements of Black culture in the United States, Black Twitter memes have been subject to cooptation by media outlets and Twitter users alike, strengthening the identity and generating defensiveness/protection of Black Twitter ideas. A prime example lies in the 41 million #blacklivesmatter Tweets that launched in 2013 (NPR), which were quickly coopted into the #AllLivesMatter tag, created by non-black users who felt excluded by the nature of the former. Both general users and celebrities like actress Jamie Lee Curtis and rapper Fetty Wap were complicit in the co-optation of the tag. By tweeting sentiments like “My kids are Mixed…#AllLivesMatter” (Fetty Wap, NBC) users detracted from the national moment and intended focus on police brutality against black bodies by trying to shift focus to those who were already more privileged. These actions severely affected the politics of the #BlackLivesMatter organization, which still fights against incorrect labels (i.e. reporter Tomi Lahren called it a terrorist organization) and cooptation by groups attempting to incur social change in the name of the hashtag.

Similarly, outlets such as Buzzfeed, Fusion, Harper’s Bazaar and Elite Daily have been known to profit from Black Twitter by curating its best moments on their websites. Buzzfeed, for example, published an article labeled, “100 Tweets That Prove Black Twitter Was The Real MVP Of 2016,” which is no more than it claims to be – just a copy & paste compilation of Black Tweets with no original commentary. This process isn’t prohibited by any structure on Twitter as off-site embedding is encouraged, but it unfortunately allows outlets to create ad-heavy barriers to access non-proprietary information. The implications of this commercialization are worrisome: Black Twitter users never see the ad revenue money generated from their memes and ideas once co-opted by more powerful outlets. However, if the imagined community of Black Twitter users continues to produce unashamedly, there’s no reason that they shouldn’t be able to re-claim their national Moments and delight in the inexplicably, uniquely black humor that sets them far apart from the others.

Bragg, Ko. “Some Celebs Are Still Backing #AllLivesMatter but the Internet Feels a Way about That.” NBCNews.com. NBCUniversal News Group, 08 July 2016. Web. 07 Mar. 2017.